It was one of the turning points in my life. During one restless morning I learn how to domesticate fear. I had to complete an express training of befriending terror, but in the end I think we did quite well. I made a decision to become fond of the tarantulas, because after all it was me who was their guest and not the other way around. I stiffened with fear, I couldn’t move an inch, but I remembered what I was told by the shaman, from whom a couple weeks prior I got an introduction on jungle safety. 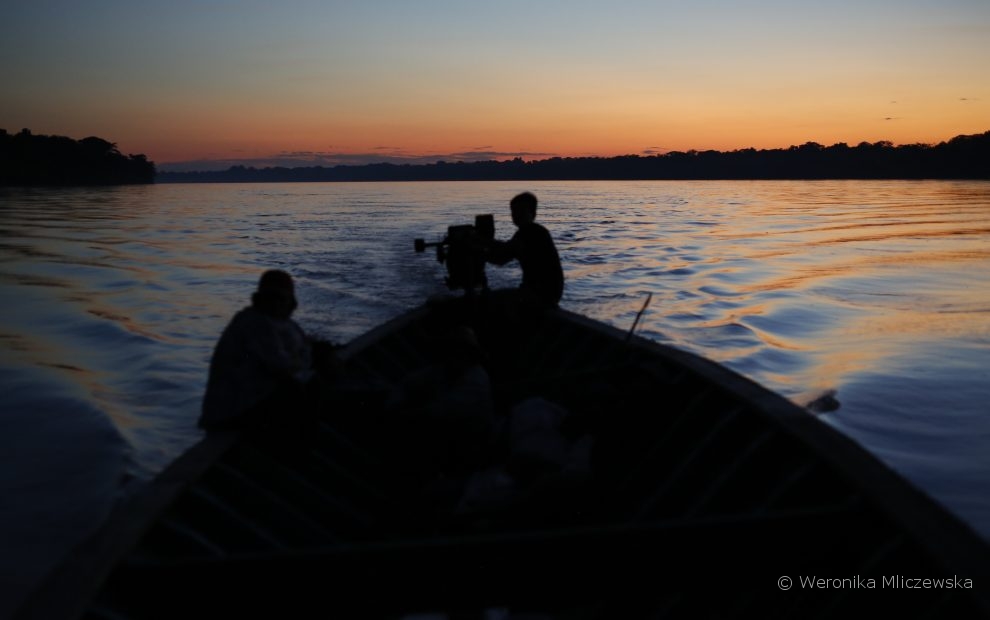 We were on a canoe along with members of the Ese Era tribe. We had arrows, a peke peke engine that would break every now and then, a storm on the horizon and it was shooting like a sling, we had birds panicking upon our arrival to a dense forrest and smugglers of amazonian trees sneaking through the darkness, transporting thick logs along the river.Even though the night was impenetrable and you couldn’t see a thing, the river became their highway for transporting huge timbers, worth thousands of Peruvian sols out of the rain forrest and under cover of night.The members of the Esa Eja tribe were used to the situation. Yes, they felt helpless and their only reaction was to try and navigate the canoe in such a way, not to let it crush on the logs, hiding in the water, impossible to spot in the overwhelming darkness.Navigation was based on hearing, rather than vision.

It made me understand, why they prefer to travel on a canoe at night. During the day, in full sun members of my little crew would fry up like greaves, for hours with no shade. So they chose to prevent it from happening and exposed themselves to a potentially aggressive encounter with the smugglers instead of burning under the sun.

Many hours later, we drew to the shore and one of the men shouted out, that I could step off so they can launch the canoe a few kilometres further, as the village ran along the shore. I looked around and what I saw was thick wilderness on a high cliff, that I would have to climb while drowning up to my knees in mud. 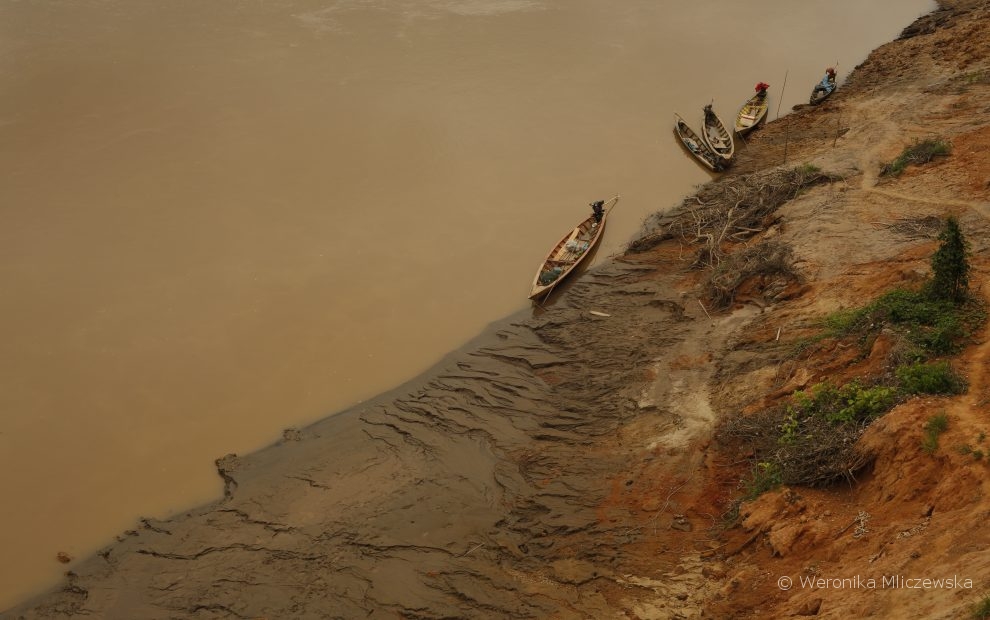 I waited for over a week to be accepted by their chief and introduced to the community by an organisation supporting their rights. And I didn’t do it so I can find myself in the heart of their community, in the middle of the night and all by myself. It would be stupid and a life hazard. One of the men got off the canoe with me and we started to climb the muddy mountain. The jungle smelled, breathed and a galore of fleshy aromas was floating in the air, driven on a light breeze and through it’s dense corners.

Later the man pointed me to a spot where I could set up my camp. It was a construction built on poles, covered with a shed made of palm leaves. He then told me to climb up and stretch my hammock over there, tying it to the wooden pillars. We were supposed to meet in the morning. In places such as this one life dies after dark and wakes up with the rising sun. Everything around me was completely dark, but i had brought a flashlight, a head one.

There was a tent put up on a wooden floor, it must have belonged to someone visiting this community like I was. Whoever it was, he or she was sleeping deeply and didn’t move even I started ringing the clangs and rattling my gear. At the entrance of the tent I saw a long machete.

I tried to install my hammock as fast as I could. It was a type with a net that didn’t let the insects through, but mosquitos had a feast at night anyway, breaking through thin fabric of the hammock. I moved ably, quickly and economically, I wanted to swing one meter above the ground as fast as I could and feel safe again. Suddenly, something similar to electricity praised my foot. I had already taken off my shoes and threw them inside my hammock; I didn’t want to find an unexpected companion inside in the morning. Last preparation to sleep, that bizarre electricity that went through my foot. It went a little numb, for a little while I wasn’t able to move my toe. I decided not to worry about it too much and I scrambled into the hammock and locked it from inside. I breathed a sigh of relief.

The night was peculiar. New location, covered so completely with the dark of night.  Men from the boat vanished and I slept in a deserted house on poles with a stranger. I had usually been hosted by families, usually among locals and even though they were strangers, they let me create some sort of refuge while here I felt completely abandoned. Additionaly, my greatest fear awoke – I am panically terrified of mice and rats. Not once have I slept in huts roofed with palm leaves. At night they become playgrounds for all sorts of rodents that run around cheerfully, as if they were playing tag. Night in the jungle is a change of shift. During the day animals give in to humans, let them complete their duties and at night they take over, no one argues with them. For them it is a natural way things are, a cycle that everyone agreed is a status quo of coexistence with Nature.

There I was, swinging in my hammock, falling asleep at times and then waking up to the sound of storm and rhythmic scratching sounds of the rats. I didn’t feel like picturing them, but they must have been enormous, making sounds as if they were size of a black panther or some other sort of a wild cat. They wandered around the poles and agressively penetrated the roof, like they were padding a nest, a den, a base of departure for their nightly escapades. The noise was so intense, it woke the wanderer in a tent. I heard him turning from side to side, not being able to fall asleep either.

-Señor, what could it be? Are these rats?

The man didn’t respond, although I was sure he was awake. 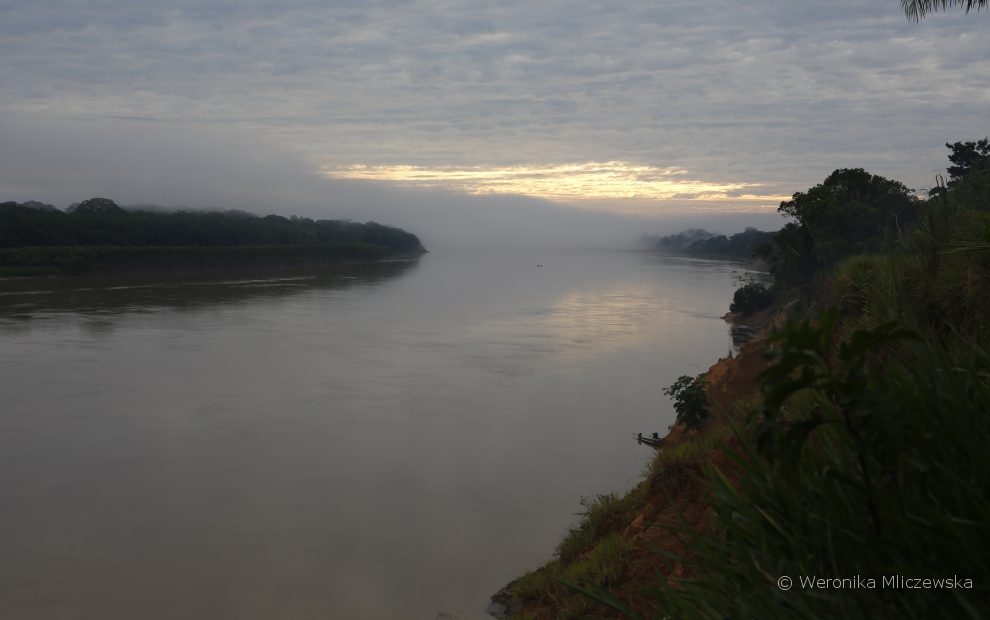 The answer was brought to me by the dawn. I opened my eyes and a meter above my head I saw a gigantic TARANTULA!!! It was a size of a rat, hairy, black, and the time, static. I wanted to scream, screech to the heavens, but I stopped the cry and choked it inside. I realised it wouldn’t work. I looked around and saw three other tarantulas marching on the leafy roof. I trembled with fear and probably shook my hammock to the sides, making the petit construction experience an earthquake.I wanted to teleport myself out of there or vanish in the air so that either I disappear, or the tarantulas. But it was a no go. They stubbornly resided right above me. It was one of the turning points in my life. During one restless morning I learn how to domesticate fear. I had to complete an express training of befriending terror, but in the end I think we did quite well. I made a decision to become fond of the tarantulas, because after all it was me who was their guest and not the other way around. I stiffened with fear, I couldn’t move an inch, but I remembered what I was told by the shaman, from whom a couple weeks prior I got an introduction on jungle safety. And what he said was, that the jungle is a reflection of what lies within you. It teaches you lessons to help you grow as a human being.

He told me that if we feel united with the jungle, then the jungle will never do us harm. However we must respect it, know it’s rules and coexist with it in harmony. If we do, the deadly venomous snakes, plants that can grow in your fingers, spiders and whatnot will also accept us as a part of this incredibly luxuriant whole. I therefore decided to grow fond of my companions.

I realised that there was nothing I could do. I was certain that my known companion was aware of our nocturne entourage and simply didn’t want to startle me.

I didn’t know whether he spoke spanish, but the word tarantula always stroke me as a very international one. When I made peace with the tarantulas and the fact that we share the same space, I felt composure filling my body and I fell asleep like a baby. I decided I was going to trust the lessons of the jungle, whatever they might bring me.

I woke to the sound of my companion moving. He opened the entrance of his tent and grabbed his machete. I had no idea what he was going to use it for, murder the tarantulas or myself perhaps, but full of emotion, instead of a “hello” I greeted him shouting:

-“There are tarantulas here!”

The man stared at me as if I was an otherworldly ghost, to him I was way more strange than the tarantulas. White, blond, moreover sleeping in a weird cocoon appearing to be a hammock. He was standing there with his machete and gazed at me completely frozen while I was looking at him, trying to figure out wether I should be more afraid of the tarantulas, or him perhaps. But then I reminded myself of my friendship with fear and that in the jungle you have no choice, but to say bye-bye to the idea that you can control nothing at all. Being  a part of a circle of life means to give up to it’s rules, accepting that it’s either the nature or blind fate tracing the course of events. And in that case I decided…

– Señor, and you are not afraid of these tarantula’s?

The man looked around and pointed down at the wooden floor.

– Look, look how many I managed to slay.

I moved in my cocoon and saw the whole floor covered in tarantula legs. And yes, it was the same floor that I walked at night BAREFOOT. I couldn’t even race to that information.

I simply shut up.

The man stood there with a machete and I think he made an internal decision as to how he was going to react to my presence. Sharing a territory in the jungle is a big thing. We occupied the same space, him with the machete, me on the cocoon. He decided to keep his distance, but also to grant me with a piece of advice:

-There’s no point in being scared of them. You should just remember about two things. Tarantulas reside on the top of that leafy roof and they only come down on two occasions: when it’s raining and after dark.

-So yesterday, when I was putting up my hammock I walked barefoot among four tarantulas???

He shrugged, laughed and told me:

– Well, they must have liked you.

The joke he made wasn’t funny at all. Since then overtime it rained during the day, I entered my cocoon hammock and observed as the tarantulas come down on the ground, sometimes they slept, sometimes they were invisible, but I still preferred to watch them from behind my net, even though the barrier was delusive.

Whenever I feel overwhelming fear I remind myself those four tarantulas and that it is not worth to scream. And all in all I am very grateful to Mistress Jungle for such an intense lesson of befriending fear. 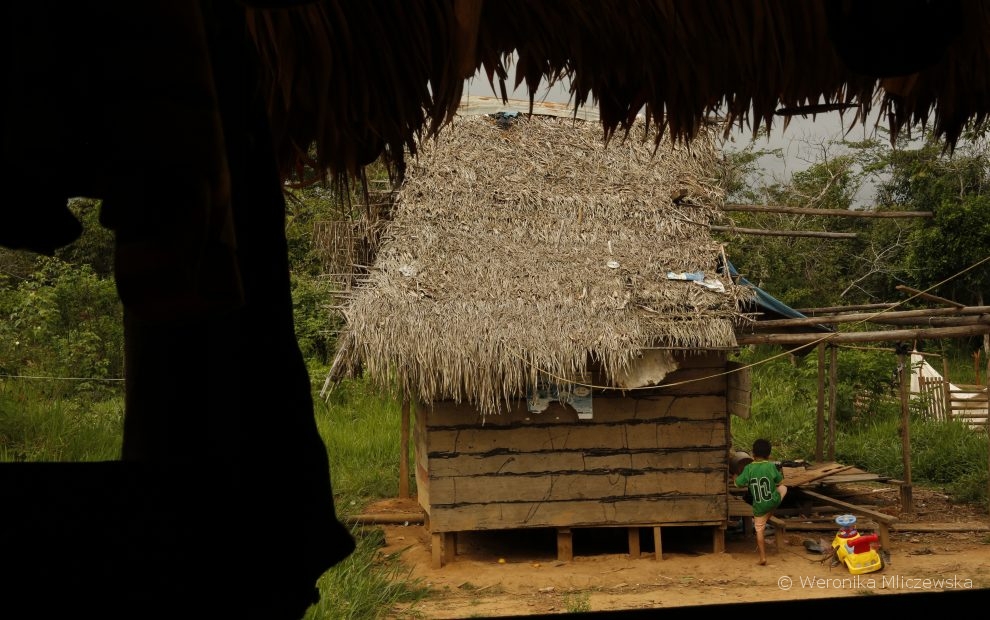